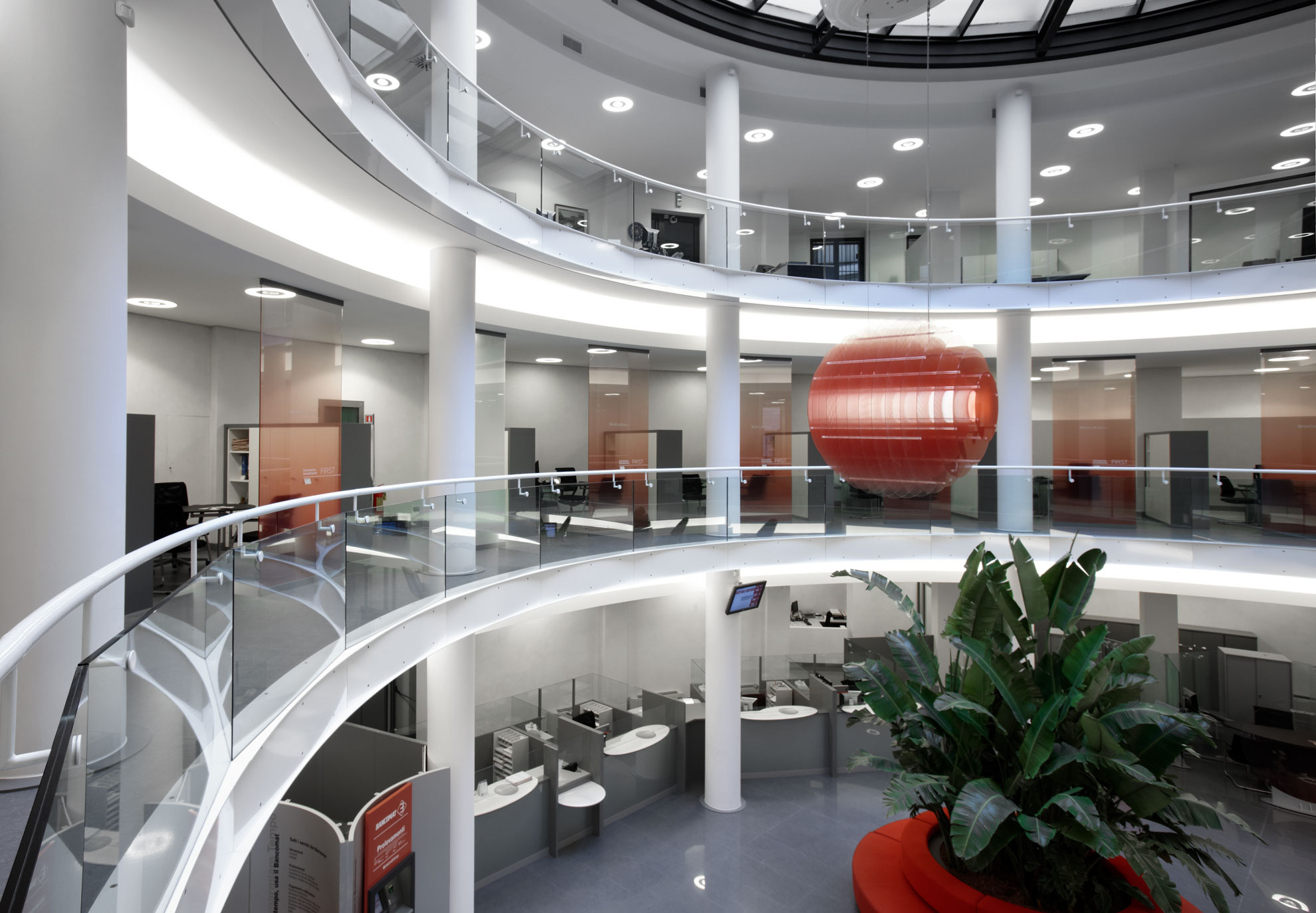 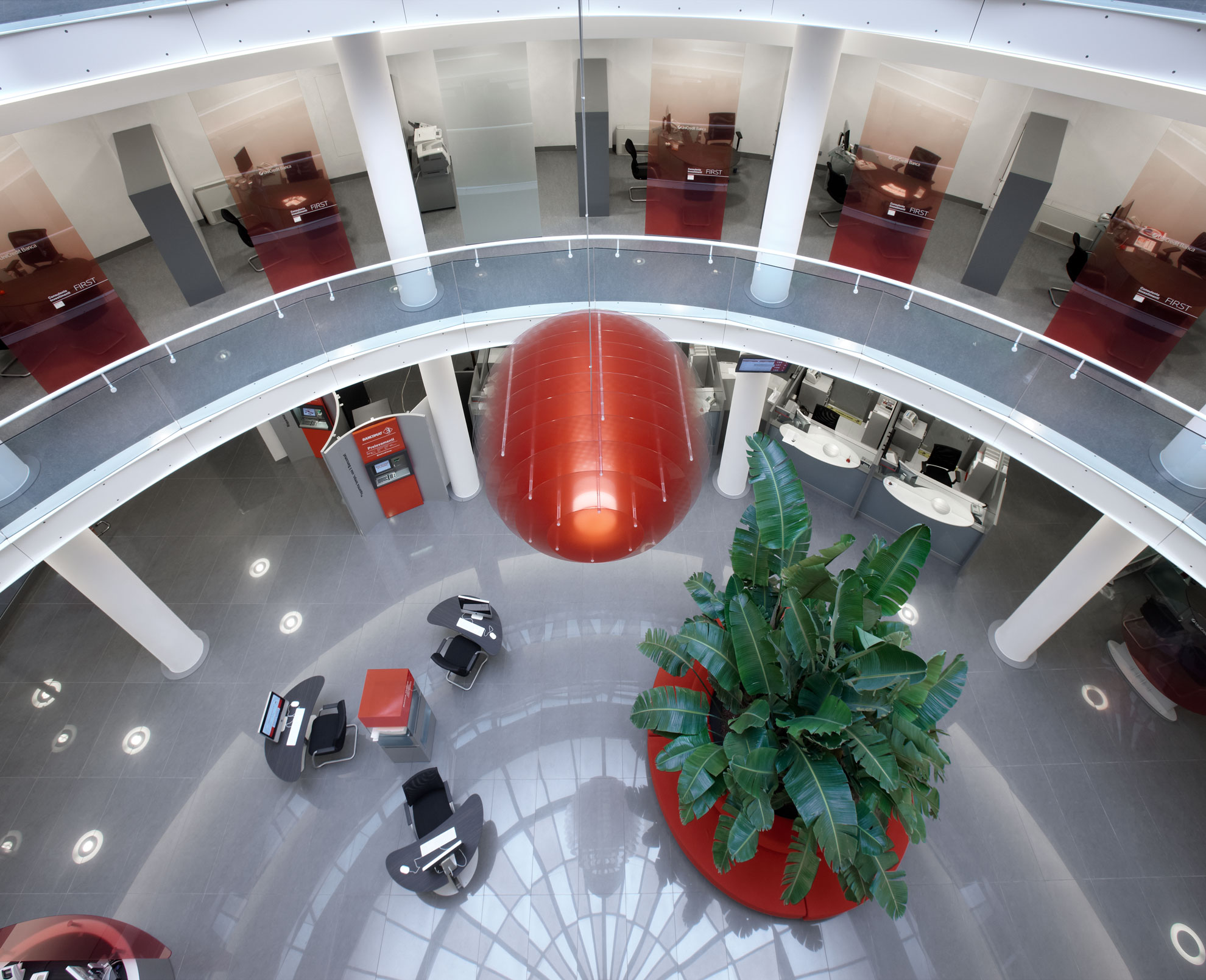 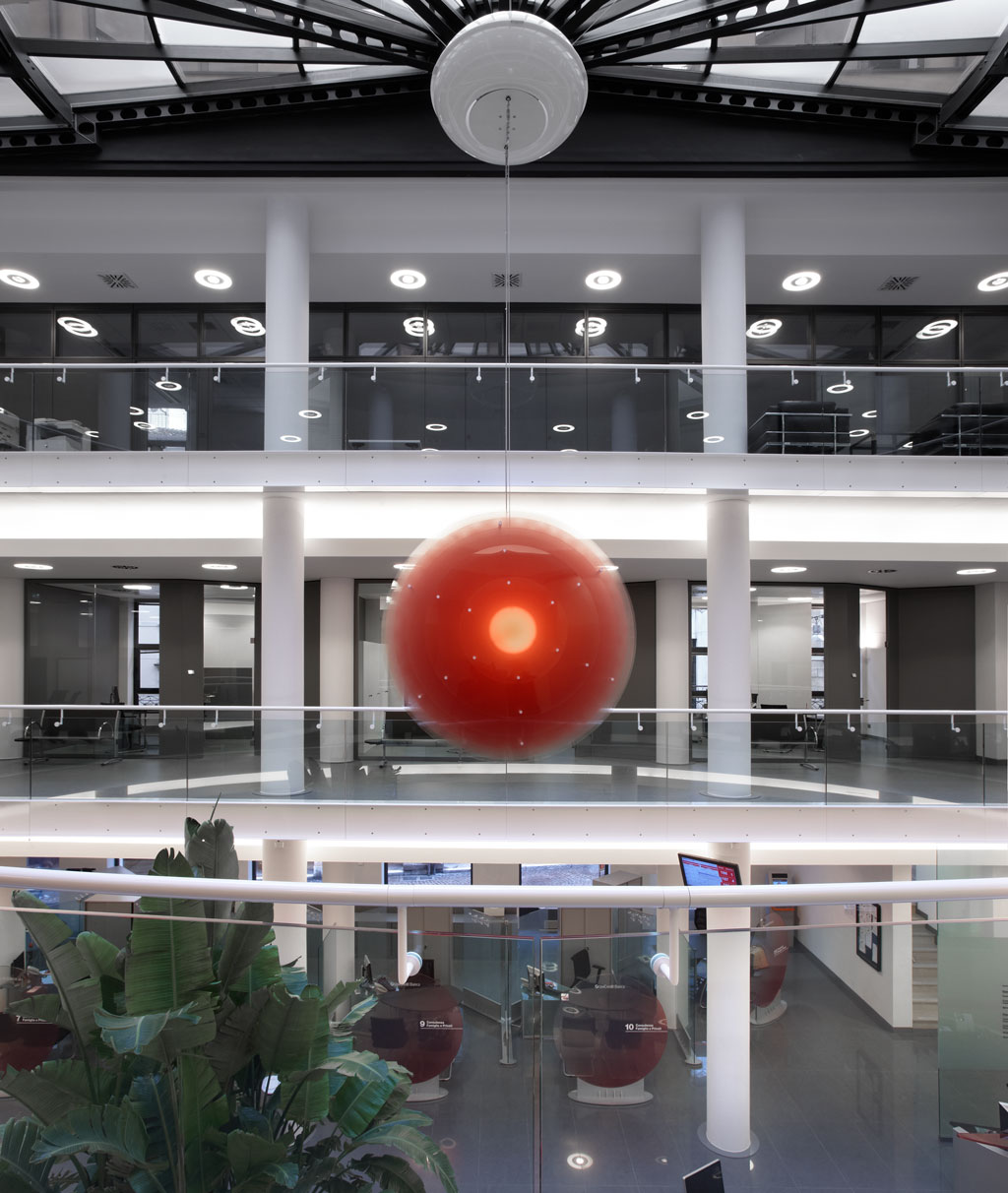 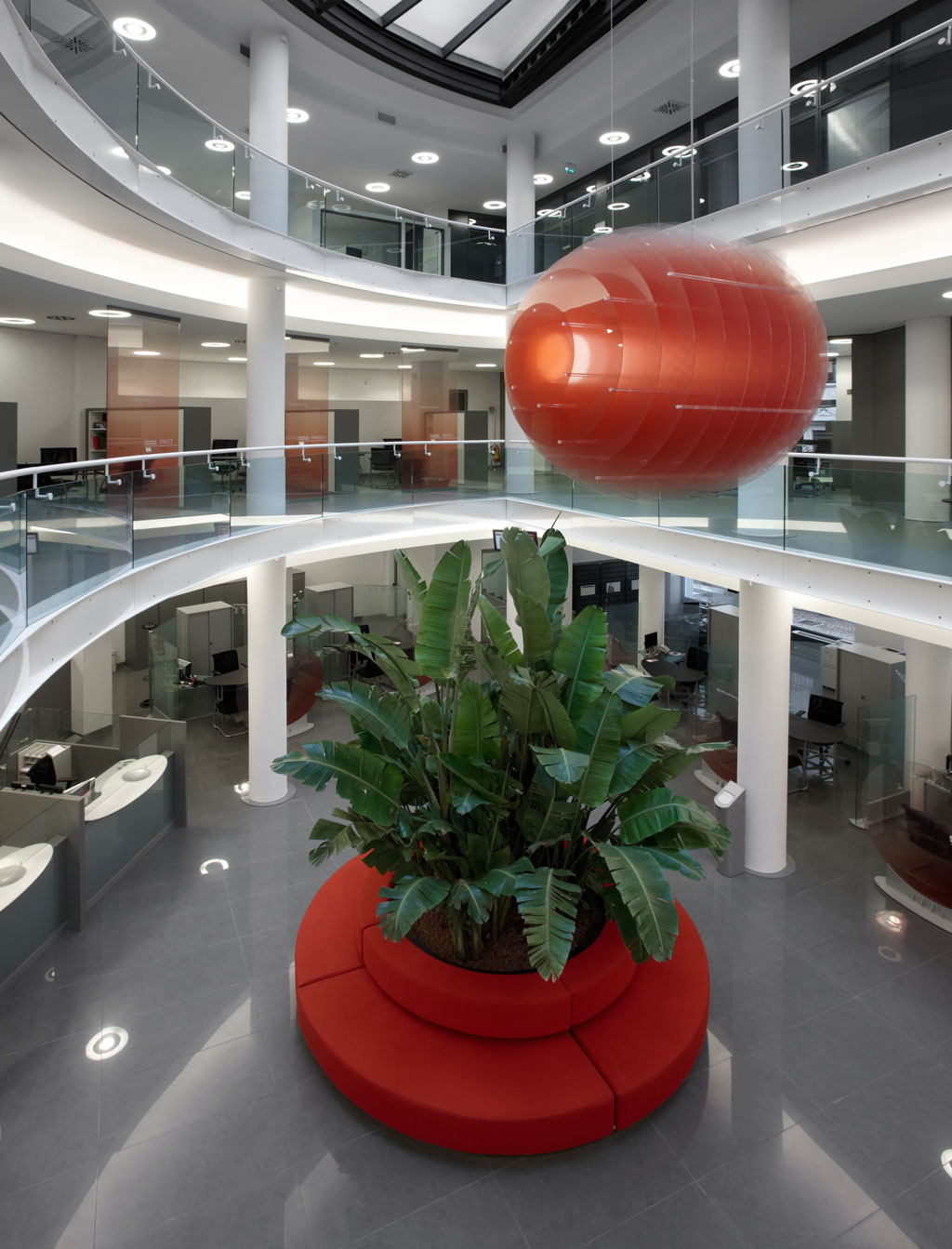 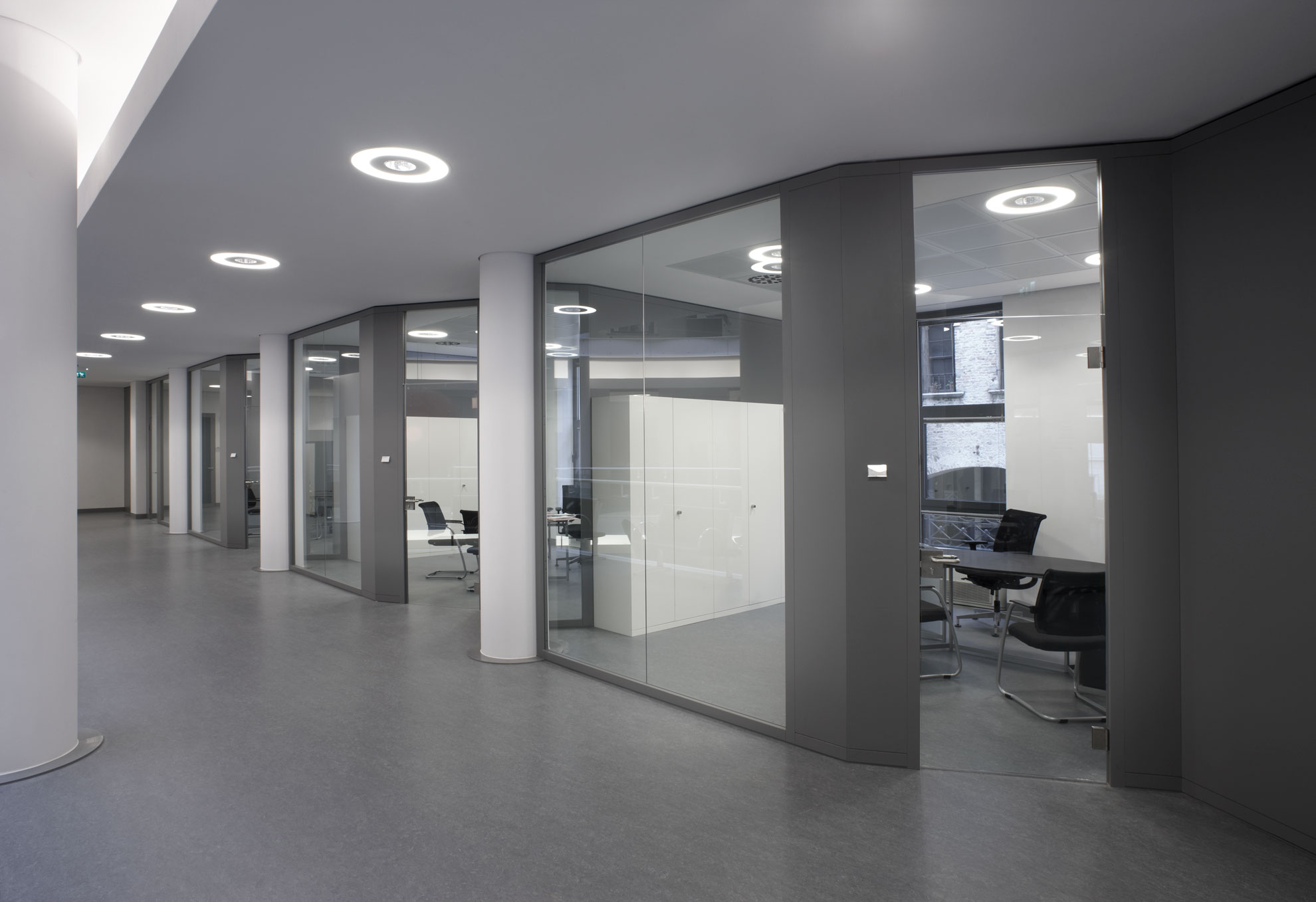 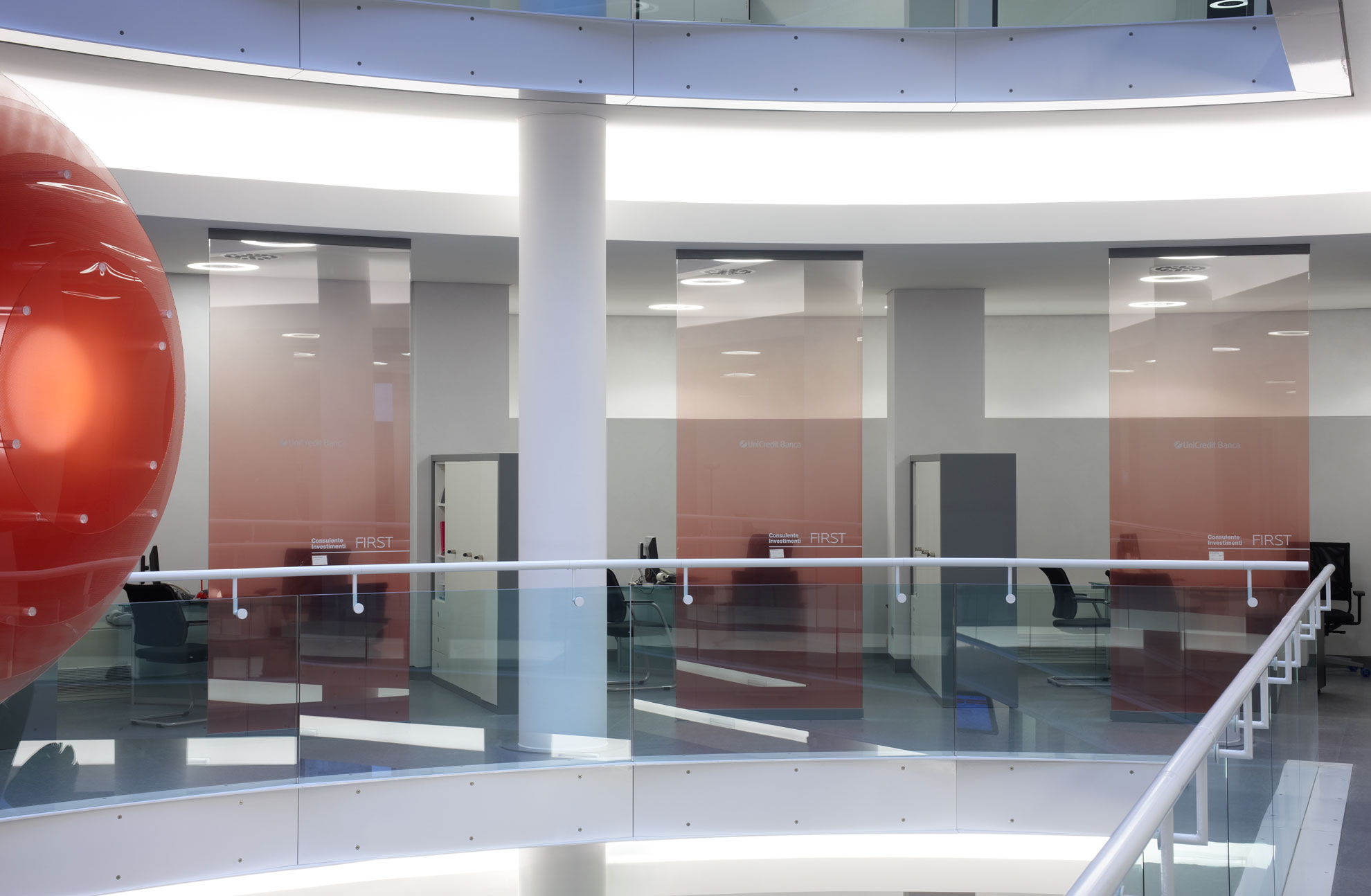 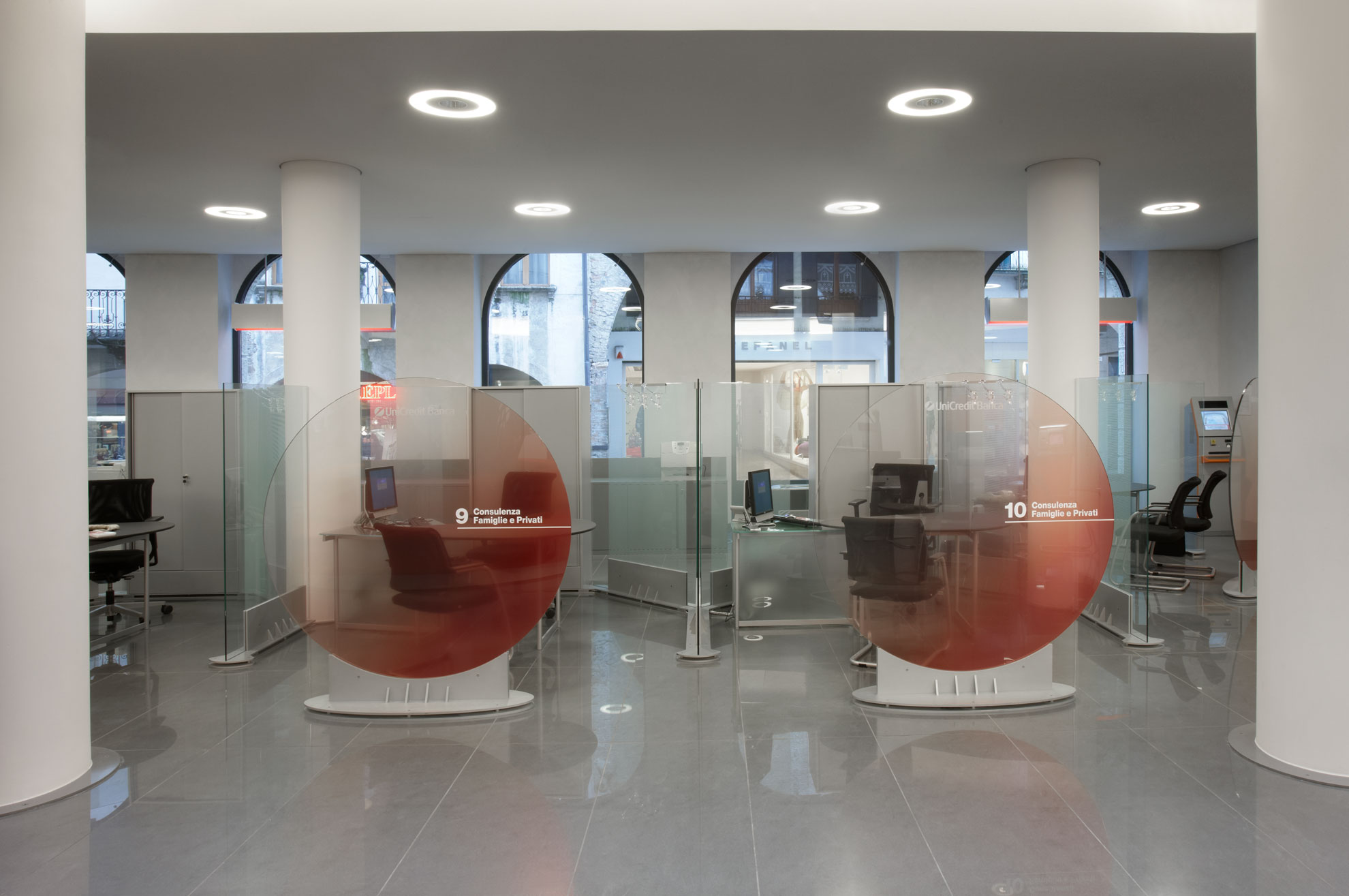 The Unicredit branch of Treviso was designed by architect Brunello Sighinolfi and built by Cesare Roversi in accordance with a global design, which identifies the branches in a visible and permanent manner. This type of design based on structuring spaces through combinable modules, envisages an itinerary through certain open functional areas (teller area, entrance area, advisory area, armoured areas, self-service area …). Designing the communication elements and the furniture is carried out with the same care used for creating design objects. The designer does not just imagine the objects, he must also ensure his ideas can be produced and achieved. The entire production process requires the cooperation of qualified suppliers, and work carried out by many people, together with a production company which possesses the necessary technical skills, is required. 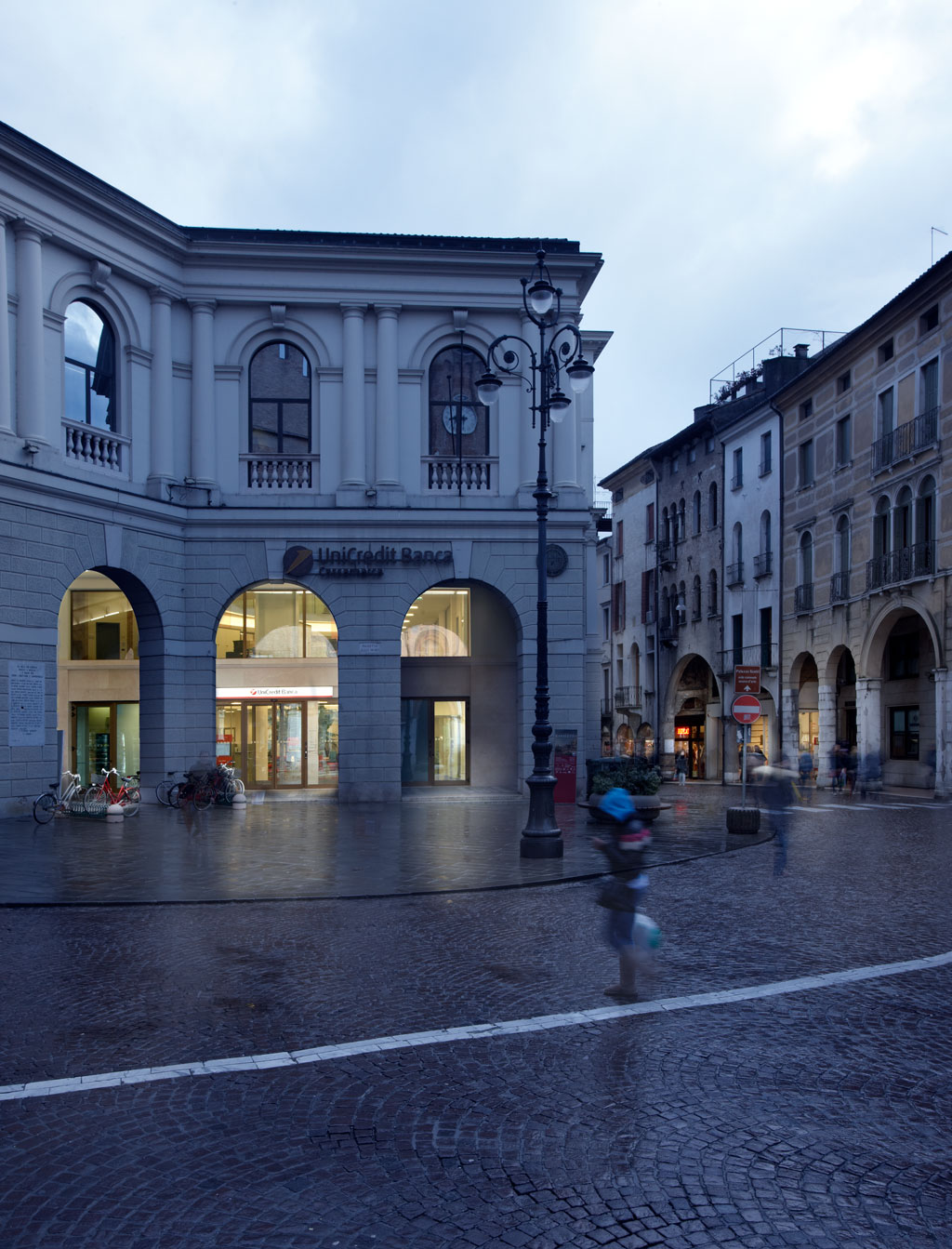 The Unicredit branch in Treviso is located on the south side of Piazza dei Signori, which is characterised by the presence of the fourteenth century Palace, the ancient austere and massif thirteenth century town hall which is an important testimony of the city’s history. The square is closed by the building which houses the branch, a sixteenth-century building which has been altered several times and whose outer part has had its stone parts cleaned and the plaster ones restored. 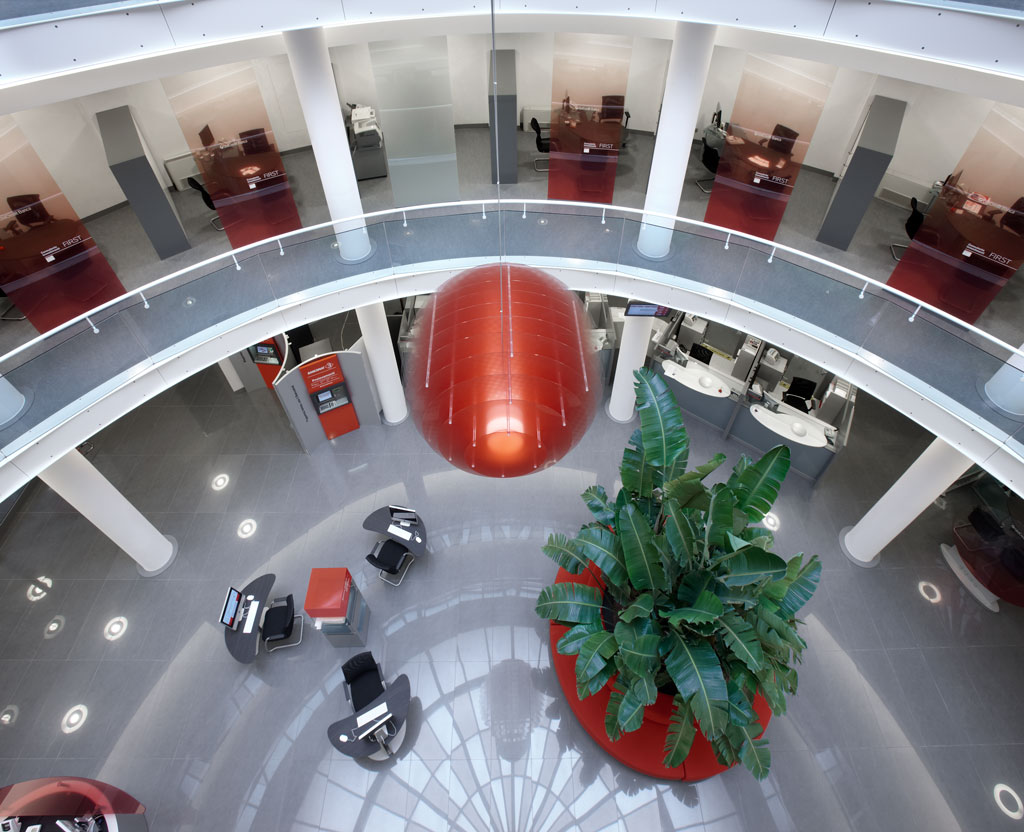 The clear shape was chosen to represent this collective space: a cylindrical inner surface can be understood immediately. The space is divided into horizontal sections, one part defines the ground floor including the area open to the public. The first and second floor display two galleries housing the office area, characterised by minimalist furniture with a low visual impact and the use of transparent and essential materials such as steel, wood and resins. 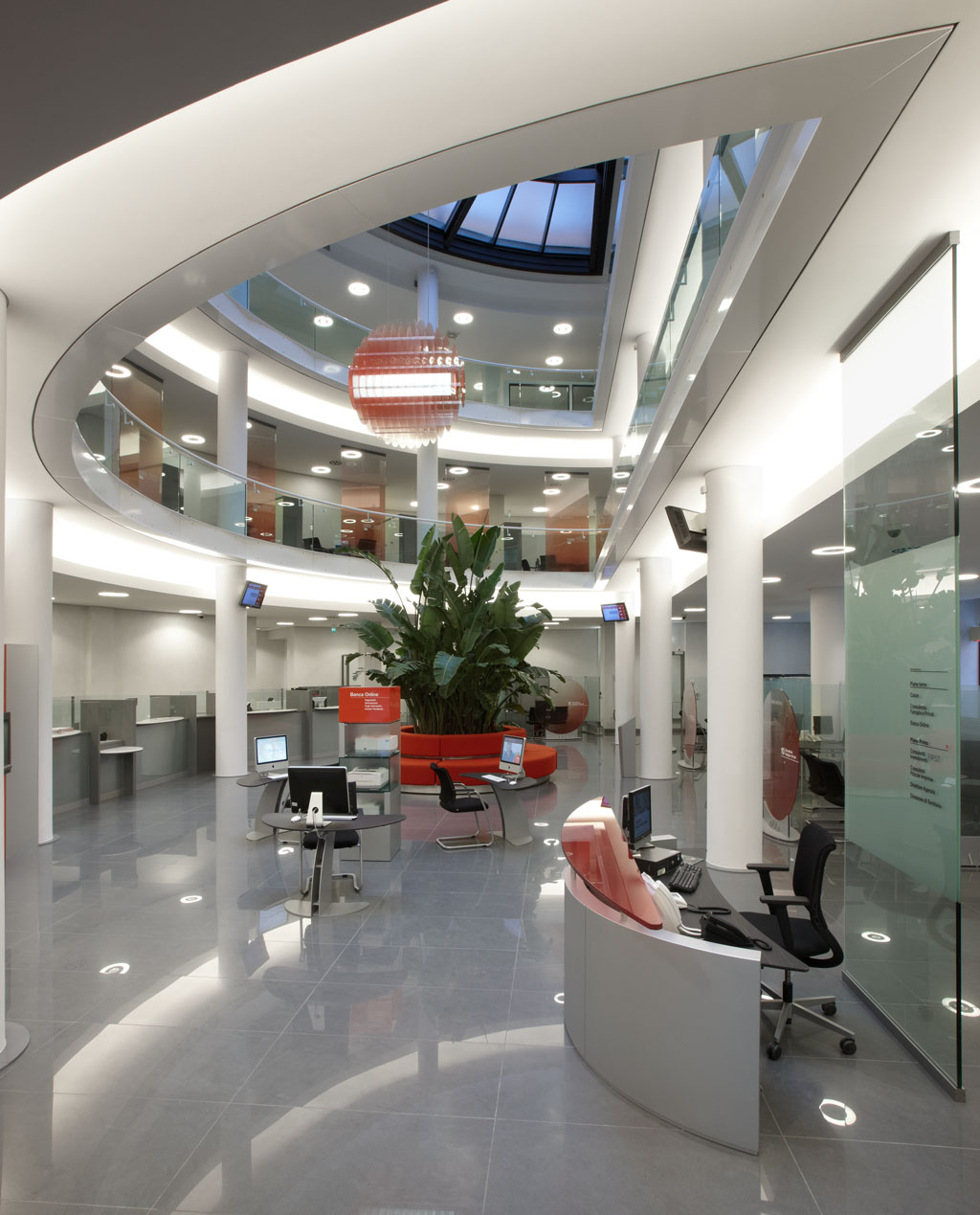 The reception counter consists of a desk with a half-moon shaped front panel. 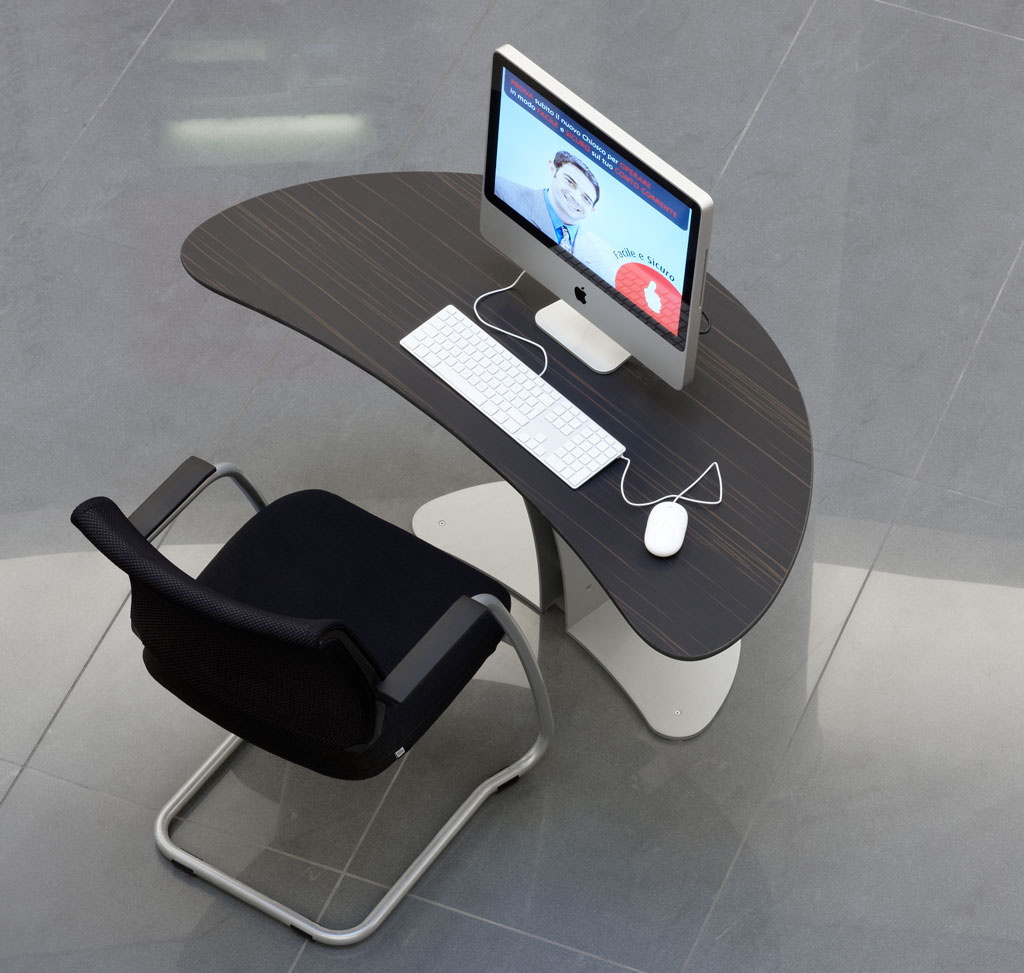 The internet point island is intended to accommodate customers wishing to access the bank‘s Internet services, and is made up of a group of three workstations with related chairs and monitors, as well as a CPU holder. The desks of the various stations have a bean-shaped top made of a fully coloured laminated wood, covered in black shaped and bevelled laminate, with a silver coated galvanized iron base. The internet point CPU holder consists of two tempered glass containers placed one above the other on a metallic silver painted parallelepiped, complete with holes for the cables and a metal base for housing the computer tower. The upper top is a red methacrylate cube-shaped element. 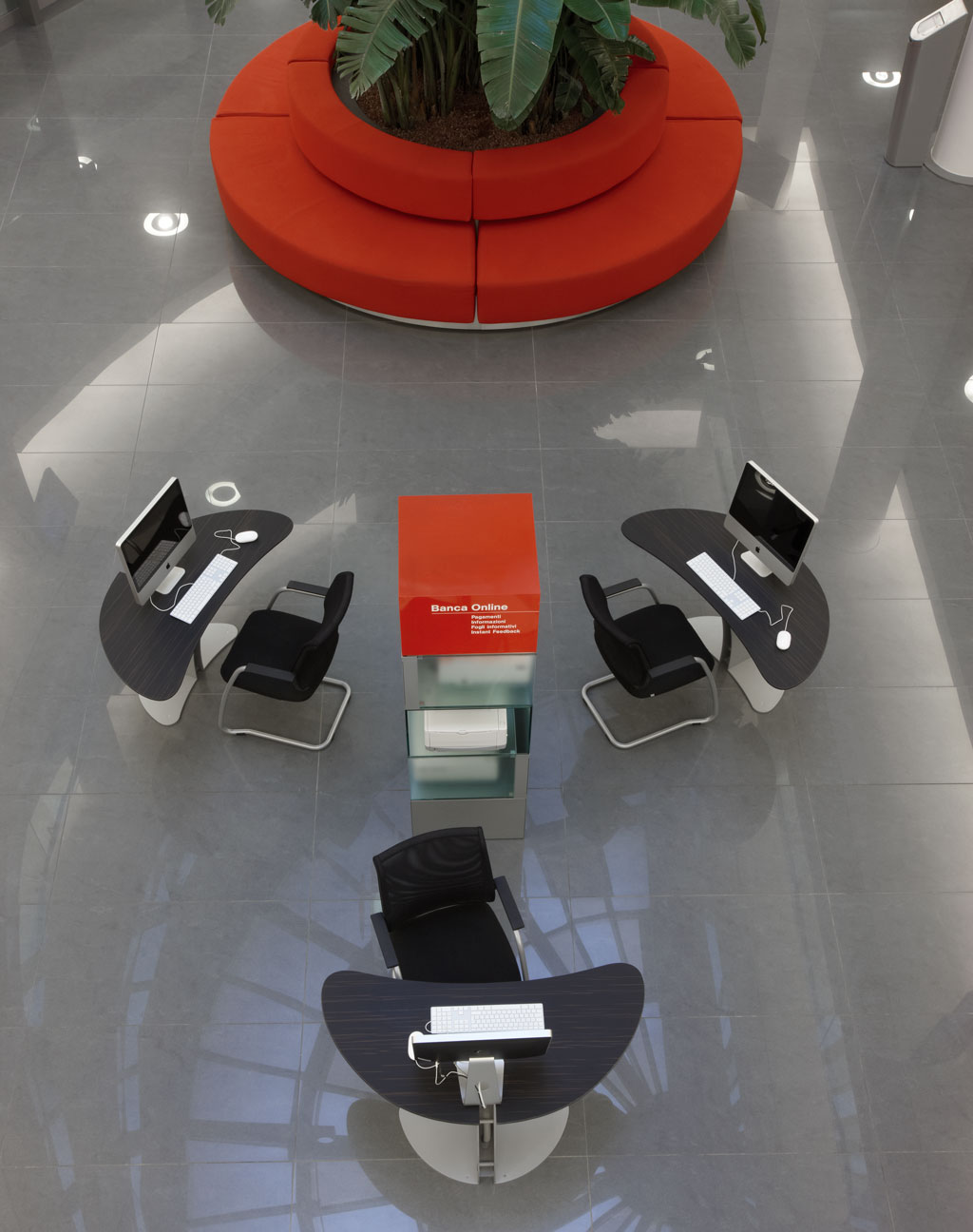 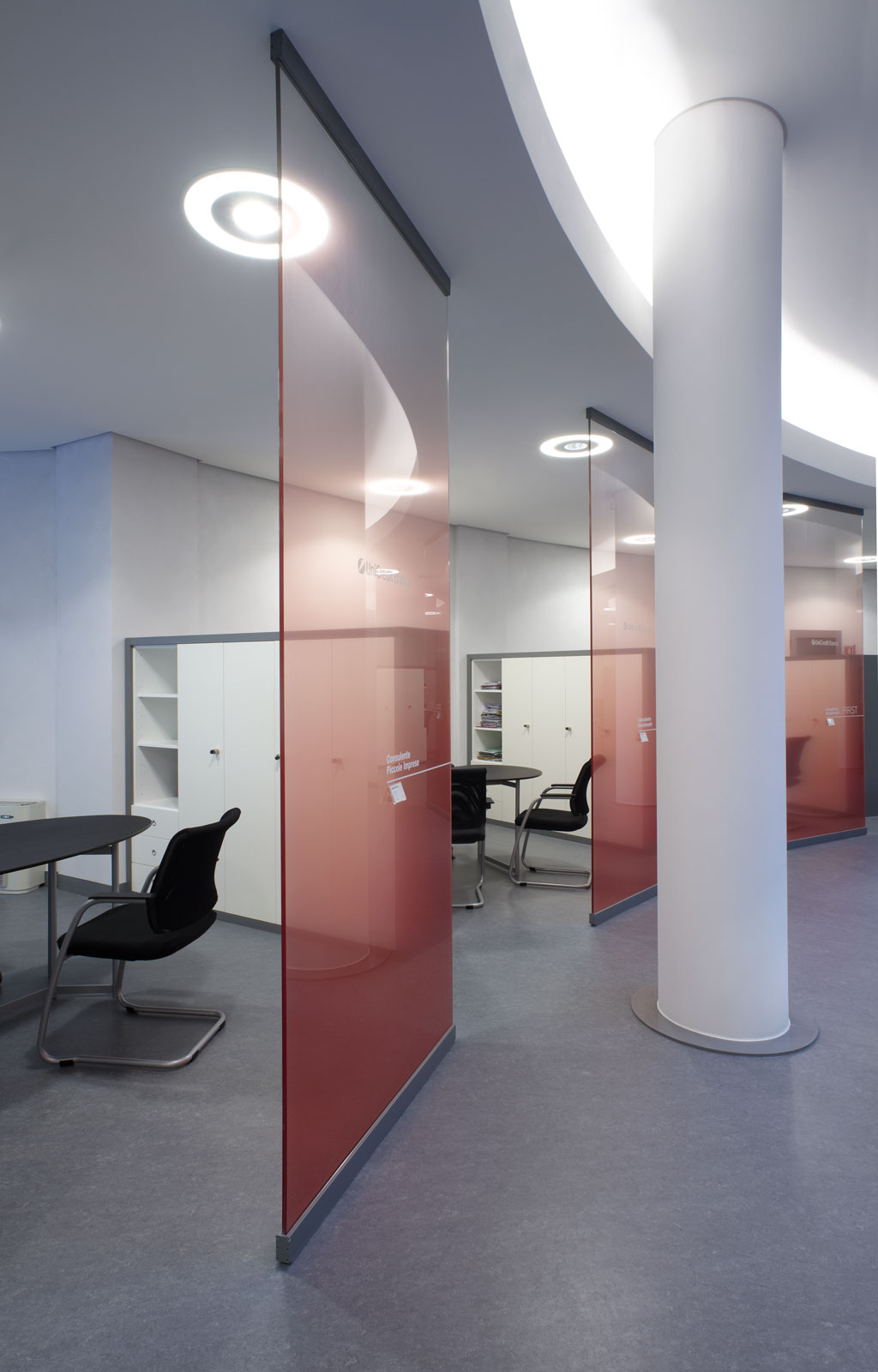 The mobile panels in laminated crystal glass, with a metal profile attached to a ceiling track, serve to delimit the corridor in front of the offices. The decision to produce the crystal glass panels suggests once again the need for "Transparency", the desire to eliminate all the constraints which made the bank be seen conceptually as a "closed bank". This has allowed characterising them as a means through which to view inside the offices with great transparency, in order to corroborate the idea of an open bank, which has nothing to hide. 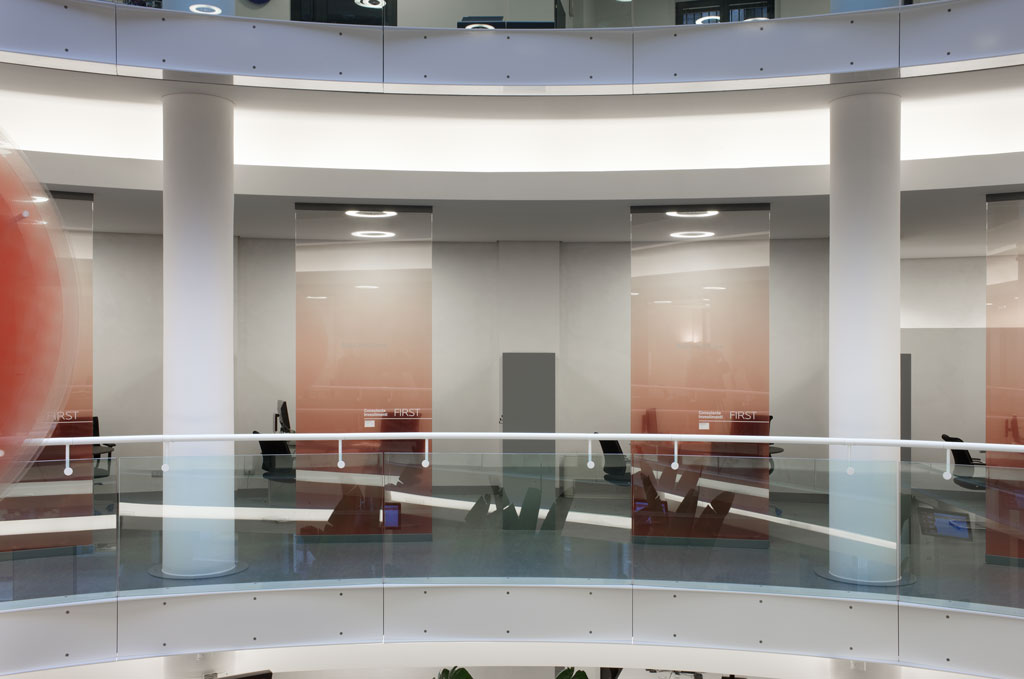 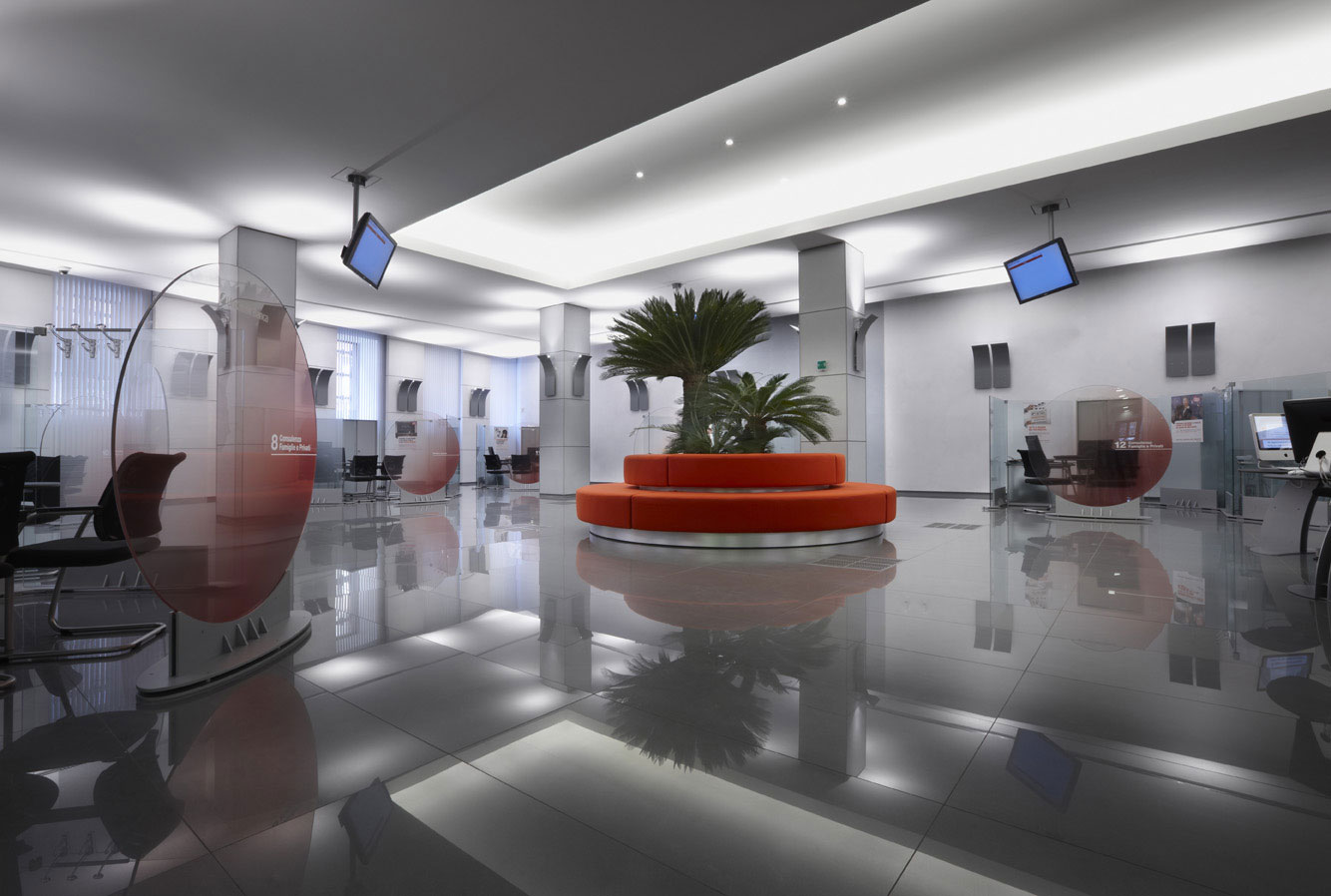